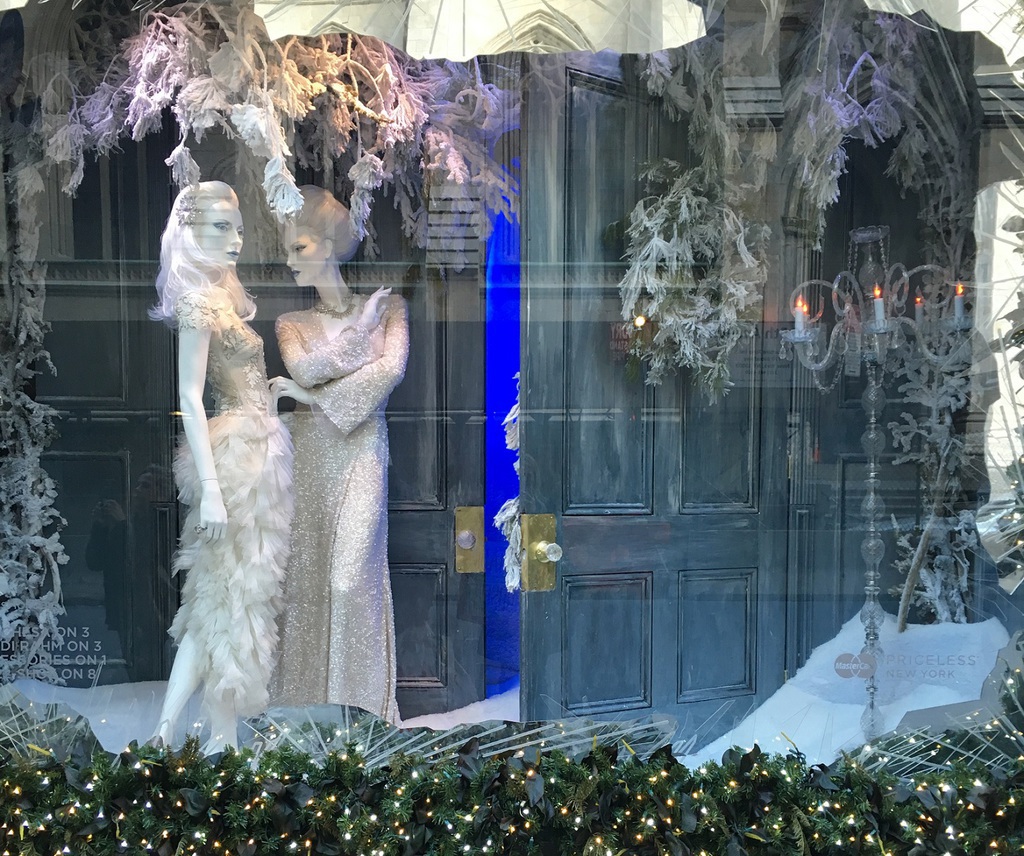 Whether or not Thanksgiving sated your appetite for the holiday season, a stroll down Fifth Avenue and Madison Avenue, where the window wizards ply extraordinary magic, will surely coax you back into the seasonal spirit. Designers, architects and the public in general, who usually breeze by these store windows without a glance, are struck in awe as they experience the creativity and craftsmanship of the finest display designers in the world. Normally, store windows are designed to grab the harried, speed-walking shopper for a glimpse, but New York holiday windows capture, freeze and nearly incarcerate the shopper’s attention with their cleverness, astonishing detail and up-to-the-moment gimmickery.IMG_2394 WEB

Bloomingdales has commissioned the floral designer Jeff Leatham to create prismatic metal animal sculptures of deer, penguins and other fauna bathed in caves of roses. Most striking is the golden buck, whose ten-point rack of antlers is formed with brass jingle bells. Music accompanies the display, of course, but true to the “Holiday through the Senses” theme the air in front of the window is somehow perfumed with a bayberry scent, reminding us of Christmases past. A window gimmick I have never encountered before! Barney’s seasonal spectacle focuses around ice and its related forms, which is a prevailing theme in New York’s windows this year. (We are seeing a lot of “chilly” windows despite the unseasonably warm weather we have been experiencing—perhaps they were inspired by last year’s brutal winter!)Dale Chihuly iciles WEB Dale Chihuly created a window of crystal icicles growing from a pool of black water. A starburst of these lethal, painted projectiles floats in the center, lit by an old-fashioned kind of Christmas color, which seems to transform retro aluminum holiday trees from yellow to orange to blue and continuing up the spectrum. Perhaps most fascinating is the window that has been rebuilt into a real walk-in freezer. On the steel, riveted and frosted walls hangs a series of sharp tools and saws. Front and center is a sculptor’s table on which stands a large block of ice. Actively carving this chunk of frozen water is a real, live professional ice carver, wielding a chain-saw spurting ice shards all over the window, or, rather, his “studio.” I’ve never seen this gimmick either! Clad in a silver lamé astronaut’s suit, this courageous artist heroically slices away, surrounded by voluptuous ice figures he has already completed. Needless to say this drew huge crowds.

Of course, the “big kahuna” of the window dressing world is Bergdorf Goodman. Their painstaking process has been well-documented in a film, “Scatter my Ashes at Bergdorf Goodman,” and in a recent Assouline book by David Hoey, Windows at Bergdorf Goodman, so large it could crush your coffee table. These are the windows by which all others are measured. Other displays may have gimmicks, tricks or media savvy references, but none showcase the kind of Baroque splendor or astonishing attention to detail that Bergdorf’s do. Design cognoscenti flock to these fabulous feats of showmanship and despite rain, sleet, snow or hail, they stand transfixed, blocking the sidewalk for far longer than the average hurried New Yorker would like them to. I must admit that I too stood a long while, gazing at this year’s works of art.Neptune WEB Most of the forms displayed in Bergdorf’s windows this year are encrusted in jewels. Neptune is covered head to toe, of course, in creamy pearls (since he has such easy access to oysters). He is riding a dolphin bejeweled in black pearls, while a mermaid mannequin in a stunning, bugle-beaded ensemble awaits her aquatic close up. Meanwhile, Neptune seems to be tempting her with an open sea chest spilling out precious strands of gorgeous pearls. (I swear I saw a few gals faint in front of this one!)

The window entitled “Crown of Jewels” illustrates a very coquettish mannequin complete with a fan collar, flirting with two amber-covered lions and ruby griffins, while diamond-studded knights guard her and a giant amethyst crown, which hangs ominously above her head, threatening to crush her for her silly frivolity.Wheel of Chance WEB The “Crystal Ball” window, upholstered with jewels from what must be the far reaches of the universe, displays a well-clad fortune teller (who is actually a monkey in disguise) and her dazzlingly dressed client. Flanked by giant hands tattooed with astrological symbols, the pair sit beneath a massive, kaleidoscopic wheel of chance spinning fates of luck, love, fame and fortune. A true tour de force of sparkling color!

Sticking with the icy theme, Saks Fifth Avenue’s windows give us a fabulous tour of the world, with glimpses into the “Great Brrrier Reef”, the “Ice Cold Colosseum,” the “Great Wintery Wall of China” and the “Frosty Taj Mahal” to name a few. These wintery wonders of the world, displayed as icy, white architectural structures, are accompanied by mannequins dressed, respectively, as a sparkling sea nymph, a dazzling gladiator, an elegant empress and an Indian princess. Facing St. Patrick’s Cathedral are windows filled with international confectionary favorites. Delicate French macarons, quadruple-tiered cakes and elaborately frosted cupcakes dress the tables with a sumptuous holiday feast. These succulent comestibles spill down Fifth Avenue all the way to Lord and Taylor, where the classic and customary “Old New York” windows have been upgraded to gingerbread mansions guarded by gingerbread men, stacked jars brimming with peppermints pastilles and a beautiful Georgian manor with doors numbered like an advent calendar that open to reveal seasonal scenes of snowfall, snow angels and snow-covered wreaths.Lord & Taylor Eye Candy Scaffolding WEB The whole L&T experience is enhanced by the scaffolding, normally a visual assault to New York eyes, but this year the window wizards cleverly draped the scrawny poles in so much greenery that you feel as if you’re about to purchase a Christmas tree. Adorned with sparkling lights, you are drawn from ten blocks away to view this festive treat.

Thematically, ice and icing stole the show in most windows up and down the avenues, with creamy white fur, leather and stretch pants highlighting the season’s fashion. Blocks of igloo-style ice, crystal jewels of ice, frozen waterfalls, snowflakes and iced cupcakes swept the retail windows, bringing bling to the bustling city streets.

It seems that New York put on the dog this year, elevating their holiday displays to a new level of artfulness and throwing out older themes with even more dazzling displays. Could it be possible to surprise New Yorkers even more this year? Well that seems to be the retail world’s goal this December. I highly recommend this pilgrimage-like perusal, if for no other reason than an inspirational touch of joy. Happy Holidays.